The rangatahi programme Te Ahu Taiohi was a unique approach developed between Te Aho Tū Roa and the New Zealand Festival of the Arts with the aim of engaging Māori youth in exploration, expression and performance, thereby strengthening identity and connection with the whenua and whanau. In this exploration of life, leadership and tikanga, grounded in a kaupapa Māori framework, 25 tauira from Te Kura Kaupapa Māori o Te Rito and Mana College (E Tipu e Rea unit) were taken on a journey through different forms of ngā mahi a Te Rēhia as a vehicle for developing their own confidence. Forms included kapa haka and contemporary Māori Performing Arts, different dance genres from hip-hop to Indonesia dance, mau rākau, waiata and ngā mahi taonga pūoro. Connections were reinforced by kōrero from the haukāinga and kōrero o nehe – pūrākau narratives that strengthened threads between their inner selves and the physical environments around them, fostering the continued development of their creative voices and energy. Several days of workshops culminated in a final performance as part of the festival to an audience of whānau and community. 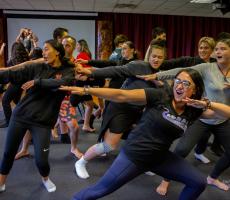 BANNER: Final day of Te Ahu Taiohi where whānau and community gather to watch and celebrate the culminating offering by the tauira and the tuākana.

RIGHT: Creative and fun, Ooshcon took tauira on a historical snapshot of hip-hop moves from each decade, exploring aspects of movement that challenged them to find their own unique movement styles. 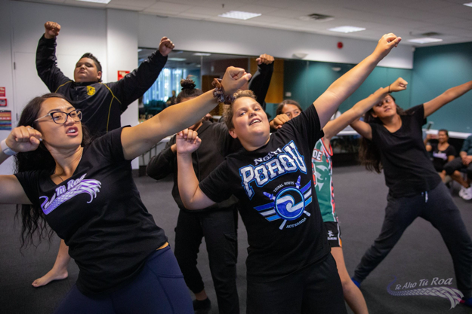