Brilliant young leaders – pass it on!

Taking part in the Wairarapa Enviroschools Secondary Student Leaders Workshop gave participants an opportunity to connect with, and be inspired by, others working in a similar environment.

At its heart, sustainability is about being able to maintain a process over time. And when it comes to sustaining environmental leadership, success comes from enabling young leaders to empower each other. Stevie Shipman, a graduate of Kāpiti College has been sharing her experiences with Enviroleaders across the region to powerful effect.

While she was part of the Kāpiti College Eco Action group, Stevie learned how to support students to come up with their own ideas for action, and then facilitate them to get that action or project underway.

‘Eco Action’ was very much student-led, although teacher, mentor and former Enviroschools Facilitator Nicola Easthope was also at the heart of the group, bringing with her the Enviroschools approach of fostering a positive, welcoming and safe environment. 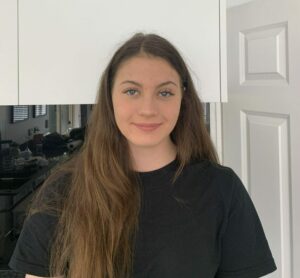 Stevie Shipman, previously of Kāpiti College’s Eco Action Group, has been sharing her experience and inspiring the next generation of Enviroleaders in the Wairarapa.

“Being a leader is not so much about being a prominent figure, but more about working with others to figure out how best to allocate your group’s responsibilities and skills. Leadership is often about doing the silent work and bringing other people into the picture.”

Stevie shared her Envirogroup’s model and her ideas about group leadership on a zoom hui with Enviroschools regional and national facilitators in 2021. Wairarapa facilitator, Gill Stewart, then asked Stevie to co-facilitate the online Wairarapa Secondary Student Leaders’ Workshop in February 2022.

“It was really cool to see what other schools were doing,” says workshop participant Anika Stewart. “Meeting them and making those connections was one of the best things about the workshop. Hopefully we’ll meet up again in the future, because everyone has a lot to share.” Anika was one of three students from Wairarapa College who participated in an on-line student leadership workshop co-run by Stevie.

“It all comes down to whanaungatanga in the end,” says Stevie. ” Establishing those relationships with others, and creating meaningful involvement of other people in your space, is key to moving forward with environmental action. Seeing how other groups go about things can give you an idea of the ‘nooks and knacks’ involved in taking action,” she says.

Read the full story about how the Envirogroup model shared by Stevie inspired enviroleaders to organise their own school Enviro event.